Speaking of the late great American food critic Craig Craiborne, the US author Thomac Mcnamee speculated that if he “were alive today, and he walked into the Slanted Door in San Francisco , I believe he would turn around and walk back without tasting the food”.

The highest grossing restaurant in San Francisco, The Slanted Door didn’t earn the ire of McNamee for its food or its famed view, but for the simple fact that it is too noisy inside.

After all, what is good food without great company? And when you can’t hear the person three feet opposite you, the food, location and service, no matter how great, all take a back seat to the ringing in your ears.

With studies indicating that excessive noise can actually alter the way we taste our food, why aren’t steps being taken towards restaurant noise reduction?

Modern restaurants have a common flaw – they are designed with looks, rather than comfort, in mind.

The quaint family diners of old are slowly crumbling, with sleek, modern restaurants rising in their wake.

Restaurateurs have overemphasised design elements in a bid to stay edgy in the fiercely competitive market between highly stylised and seemingly uninfected dining spaces. At the end of the day, curtains and carpet are out of fashion and cannot replicate the sterile, sleek modern appearance created by glass, tiles and bare tables.

The problem with these surfaces, however, is that they propagate noise. Being highly reflective, they increase, rather than reduce noise, extending the life span of sound in a room and adding to the ambient noise in a restaurant,.

The effect of noise on diners is subliminal, but ultimately self-propagating.

Speaking to SOHO Square Magazine in 2009, acoustic specialist David Hall put it best: Alluding to the Lombard Reflex theory, Hill told the magazine that “As people drink more and more, their frequency hearing goes, so they raise their voices dramatically- the end of the night is always much louder, so good acoustics are critical when the noise reaches this crescendo”.

A 2009 study of modern restaurants in Boston found that this ‘crescendo’ can reach as high as 97 decibels – equivalent to the sound of a working newspaper press.

Restaurateurs of the new era may fret over reducing their noise environment versus maintaining sleek room design, often opting for the latter; but ignoring the subject altogether is a big no-no.

Here is a quick example as to why: Resonics was recently contacted by a large, open plan family restaurant near Inverness in Scotland following complaints about excessive noise after a full refurb. We will let the reviews speak for themselves: 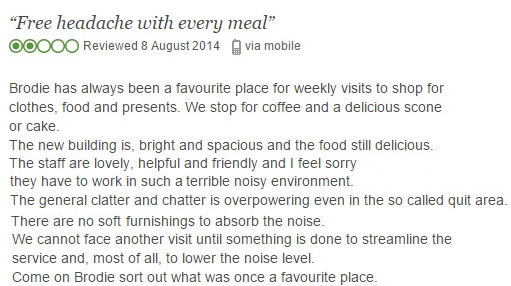 We won’t beat our own drum too much; but following our acoustic treatment, reviews are now largely positive: 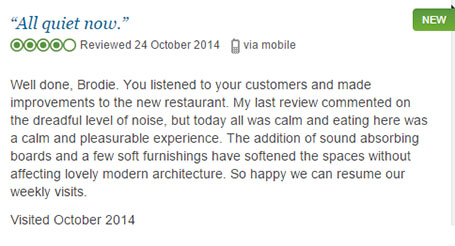 Disclaimer: Resonics did not write these reviews, as suspicious as they might seem.

A complete 180 in the sentiment expressed by this reviewer following acoustic treatment.

In an era where restaurants live and die by the online review, reducing noise in restaurants should be considered just as important as the food dished up to diners.

As Hall stated: “People leave a restaurant and they don’t know they’ve had a good night or bad night – that’s usually down to the noise”.