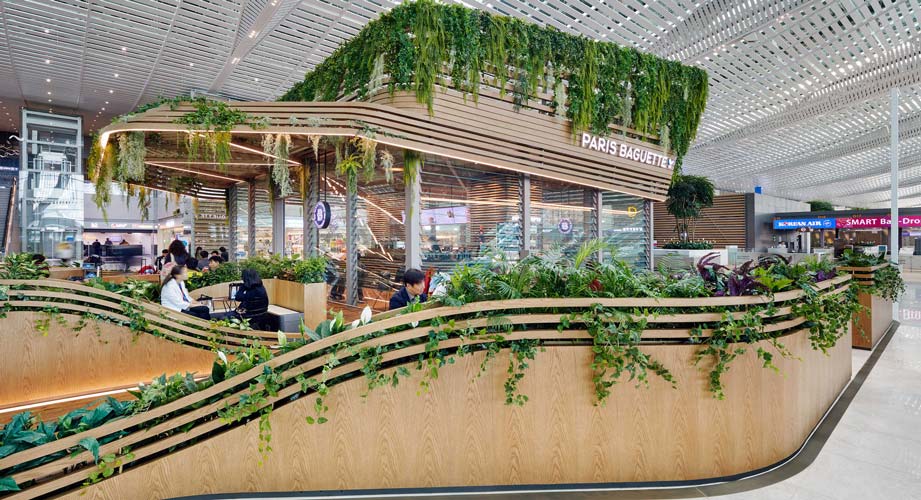 Connecting with nature brings a range of physiological benefits for humans. It is no wonder then that the latest architectural trend aims to bring the outdoors inside.

In 1877, naturalist and author John Muir, writing about his adventures to the rugged and largely unchartered planes of Alaska reflected that “In every walk with nature, one received far more than one seeks”.

All those years ago, Muir was writing about the innate connection humans have with nature– a connection forged during our time as hunter gatherers, when the natural environment was all that we knew.

The disconnect we have with the natural world is more real than ever.

But what’s the big deal, really? After all, the built environment offers us all the safety, comforts and amenities we need to thrive as a species.

Well, the thing is there are some things that the natural world provide us that the built world can’t. The rewards from nature referred to by Muir are very real.

It is little surprise then that one of the latest architectural trends is endeavoring to fuse the built environment with the natural – to give occupants a boost from nature, within the comfort and confines of the built.

What is Biophilic Design?

Biophilic design is an architectural approach to reconnecting building occupants with nature. It is a way to seamlessly integrate natural materials and mediums with the modern architectural practices.

A simple introduction of natural lighting, outside views, and vegetation are ways to bring the outside world inside – to give building occupants a chance to engage with the natural environment and reap the mental and physical benefits that come with it.

One distinction to make about biophilic design, is the efficacy of consistent and immersive design, rather than single, isolated biophilic installations. Stephen Kellert, writing for Metropolis Mag puts it best: “simply inserting an object of nature into a human built environment, if unrelated or at variance with other more dominant characteristics of the setting, exert little positive impact on the health and performance of the people who occupy these spaces.”

The studio’s design is a deliberate dedication to the incorporation of natural elements, which span the studio’s length. The sustained use of timber and greenery is an intentional effort to counteract the industrial finished of the studio, softening the aesthetic and creating a space that feels more like an airy balcony held aloft trees than merely an office decorated with plants.

Genzyme Corp’s headquarters in Massachusetts is a shining example of biophilic design, and surveys suggest it has a positive effect on the happiness and productivity of its workers.

Making building occupants happier and healthier is the heart of Biophilic Design.

The practice’s underlying theory contends that humans have a biological need to interact and observe the natural environment, and by satiating that need, Biophilic Design boosts individual happiness and well-being. It isn’t just theory, though; there are innumerable studies that support it:

The Effect Of Biophilia on Acoustics and Interior Noise Levels

From stress reduction, to increased happiness and productivity, there is a wealth of evidence supporting the benefits of Biophilic Design.

One of the often overlooked benefits, however, is acoustics.

While biophilic design can undoubtedly make a happier office worker, what is making office workers unhappy in the first place?

A 2013 study out of The University Of Sydney found that the greatest cause of dissatisfaction amongst workers across all office types was the lack of sound privacy, overwhelmingly so: 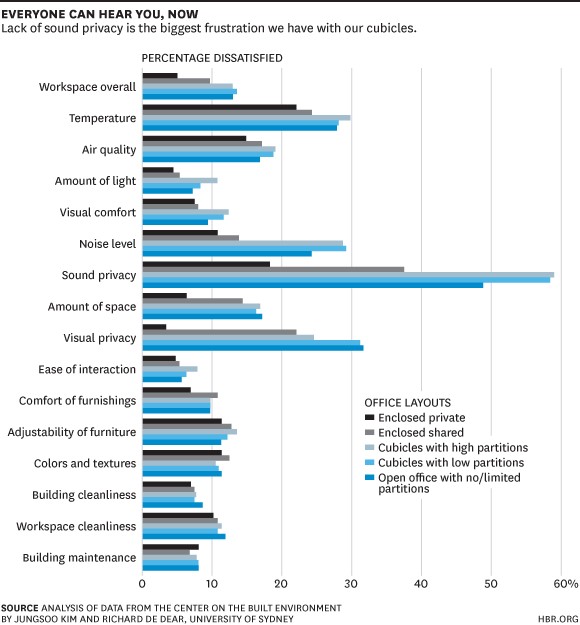 This was followed by temperature, visual privacy and noise level.

The good news is that Biophilic Design can improve all these factors.

The benefits of green walls and roofs on a building’s energy performance are well documented. One study from the Australian Government revealed that green roofs can be up to 20.5°C lower in summer months when compared to uninsulated steel roofs.

Of even greater importance, however, is the ability of plants to reduce noise levels.

How Do Plants Regulate Noise?

High density moss walls are one of the most effective ways to absorb sound using greenery.

The acoustic benefit of plants and shrubbery has only recently come into the line of sight of acousticians; spurred on by a handful of researchers who have highlighted the ability of greenery to regulate sound.

One such study has come out of The University of The Basque Country. The study tested the acoustic properties of modular green walls using two different reverberation chambers. It showed that green walls, when compared to untreated walls, resulted in “a weighted sound reduction index (Rw) of 15db and a weighted sound absorption coefficient (a) of 0.40”.

The spearhead of the study, Zaola Azkorra stated that the study demonstrated that “the green wall showed a similar or better acoustic absorption coefficient than other common building materials, and its effects on low frequencies were of particular interest”. Azkorra has suggested that this points to new uses for green walls in public places such as restaurants, workplaces and hotels.

But just how to plants manage noise? There are a few ways:

One of the main ways plants and shrubbery can manage noise is by diffusing sound.

When soundwaves strike a flat surface such as masonry, marble or plasterboard, they are reflected uniformly and in a straight line, thanks to the smooth flat surfaces. Diffusion occurs when sound waves strike a dynamic or uneven surface, breaking up the uniformity and concentration of the sound waves and scattering them evenly around a room’s area.

Plants and shrubbery are naturally uneven, and when sound waves hit their surface, they are reflected around any given space more evenly, reducing echoes and the intensity of sound.

Plants can convert sound waves to other forms of energy – in much the same way that acoustic panels absorb sound by converting sound energy into heatwaves.

When sound waves hit a rigid surface such as marble, they are immediately deflected back into the room. When sound waves strike a flexible material, like plants, the material will vibrate and the waves are transformed into other forms of energy.

The use of plants and greenery in offices is a bit of a misunderstood practice. There are several articles out there that tout the miraculous benefits of chucking in a few novelty planters in an office and expecting noise to simply disappear. On the contrary, using greenery to control noise in offices and other commercial spaces requires careful consideration.

Here are some pointers to using plants effectively in your office:

We are using cookies to give you the best experience on our website. You can find out more about which cookies we are using or switch them off in settings.