Worried About Hearing Loss? Here’s Something You Should Consider Doing…

Last week I went to have my hearing tested at my local ‘Specsavers’ who, if you didn’t already know, also have in-house audiology experts providing hearing tests.

I was met by a lovely lady called Sue, who began by asking me some questions which she filled out in a form. The main question being – “what is the reason for your visit, do you have reason to believe you are having a problem with your hearing?”.

My honest answer was this… “my wife booked me this appointment, because I seem to be having difficulty hearing her and the kids when they are talking to me. I sometimes find my colleagues are all shouting ‘Matt!’ at the same time, to get my attention. To be honest, I think I am just zoning out – I tend not to be able to hear anything if I am concentrating hard on something. Also, I am in the field of acoustics for work and now that I am 40 years old, I know it is a good idea to get my hearing tested”.

With questionnaire complete, I was asked to take a seat in a small audiology booth (which I believe was an IAC acoustics Audiometric room) and put some headphones on. I was given a large button at the end of a lead and told to press the button when I heard a tone / sound and hold it until the tone / sound had stopped.

The test lasted about 10 -15 minutes. I would hear the tone on one ear, and I would press the button and hold it until it stopped. Some were very high pitched, some low, most very quiet.

Then came the results!!…. Sitting back with the audiologist, she showed me a graph on her computer screen. Print out of results below: – 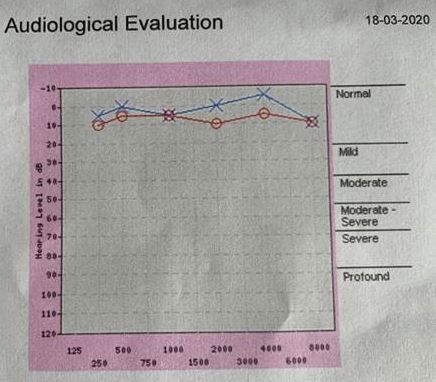 Anyway, back to my results. To cut a long story short, anything above a 20 on the Y axis means you have normal hearing. As you can see, my results are comfortably above this line. Sue said, “this is probably the best hearing test result I have had in a long time”. She did caveat that by saying her average customer is about 60 years old, but it seems I do have very good hearing after all.

My wife laughed when I told her. “No excuse whatsoever for ignoring me now when I am trying to get your attention”.

These tests are completely free and you can book online here.

Have you experienced something similar like the above? Share your story with us, the Resonics team would love to hear more.

We are using cookies to give you the best experience on our website. You can find out more about which cookies we are using or switch them off in settings.