The worst acoustic environments are essentially hollow boxes with hard, reverberant surfaces that meet each other at right angles, allowing lengthy reverberation. Unfortunately, with the advent of the highly stylised restaurant, more and more dining spaces are becoming acoustically uncomfortable, with traditional restaurants with soft, absorptive surfaces being replaced by the modern minimalist interior.

While acoustics are becoming more and more common, restaurants with comfortable sound environments are still few and far between. As we have shown before, for restauranteurs, bad noise environments can seriously harm online reviews.

Anyway, we aren’t here to lecture, but to to tip our hats to restaurants with beautifully integrated acoustic design. As you will see, acoustic consideration does not mean aesthetic compromise, but often provides the opportunity to create stunning design features: 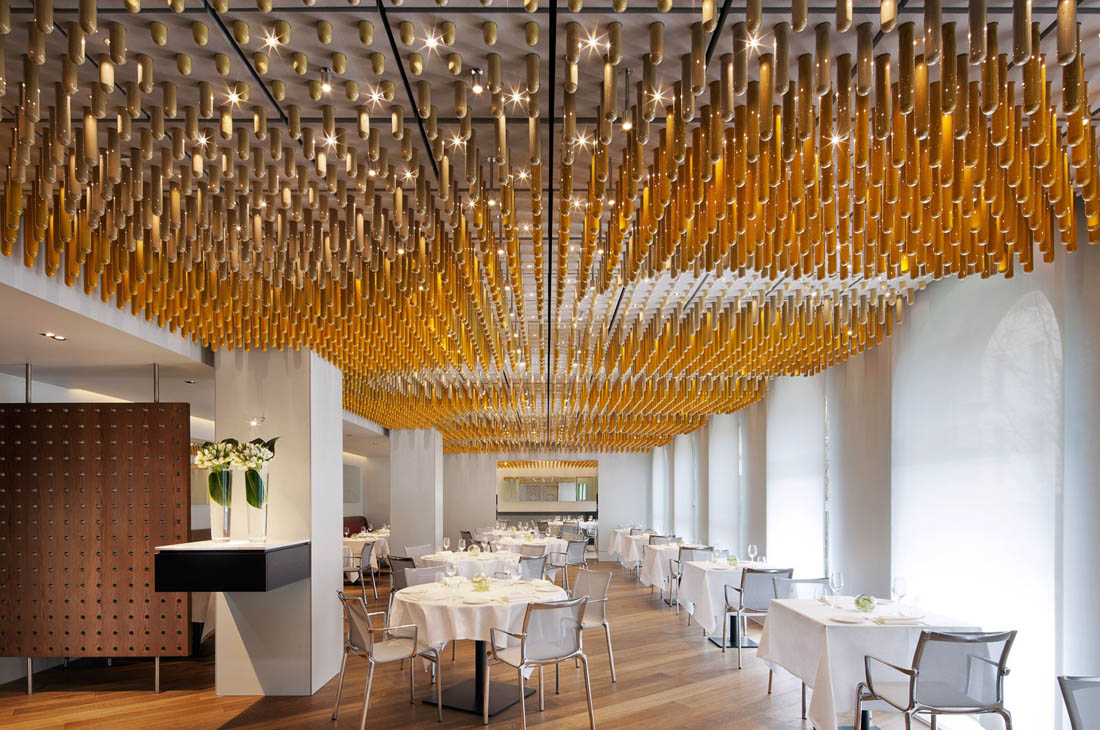 With over 7,000 spice containers suspended from the ceiling, the decor of this restaurant reflects the spice-laden Spanish cuisine that it dishes up.

The restaurant's designer, Ab rogers, has previously stated that the ornate ceiling has a dual purpose: "The ceiling supplies light and decoration, yet at the same time removes 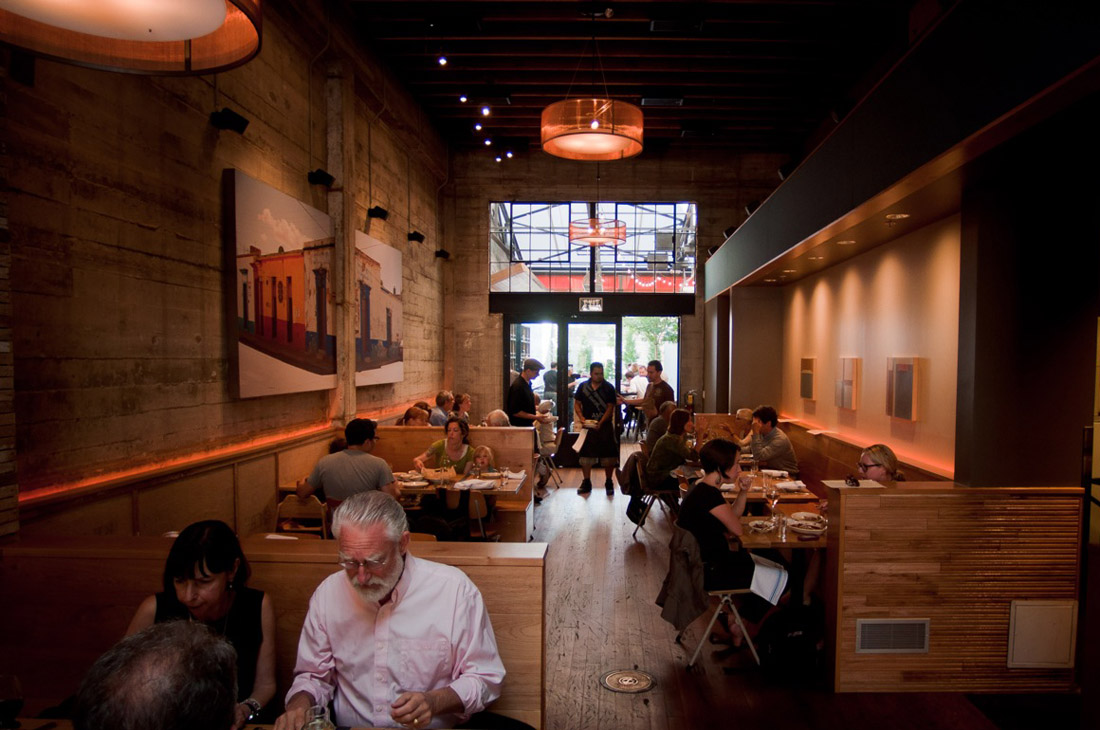 Owned by a former rock band manager, this restaurant uses a combination of 123 subwoofers, speakers and microphones controlled by an ipad to strike a fine acoustic balance.

The system allows reverberation levels to be controlled, creating as lively or as a dead a space as required. The system can "also capture the sounds and leak them back into the

space at a controlled level. Microphones pick up sounds and send them to a computer where they are digitally processed and then projected to different areas at different volumes". 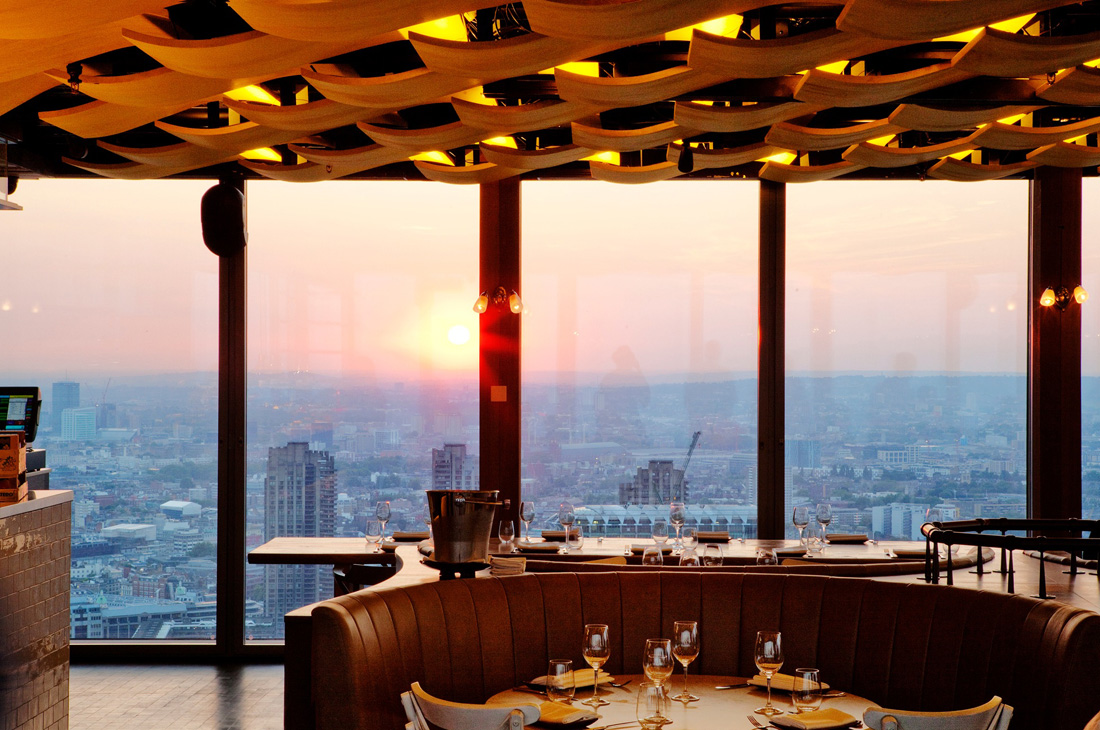 With a bustling open kitchen, wrap around floor to ceiling windows and an expansive seating area, acoustics in a space like this are always going to be a consideration.

Patterned 'waffle' tiles decorate the ceiling, acting not as aborbers, but as acoustic diffusors, breaking up uniform soudnwaves and reducing noise reverberation around the room. 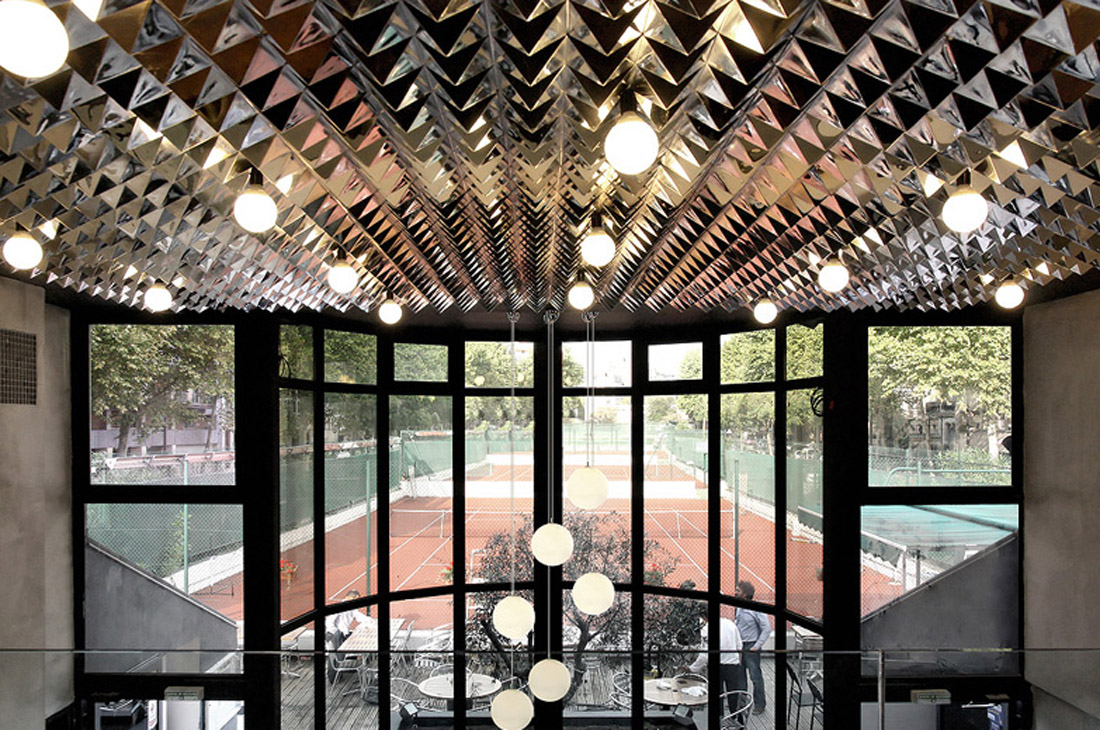 The worst sort of acoustic environment is essentially a box with hard walls at 90 degrees, allowing lengthy reverberation times and creating auditory discomfort.

This restaurant in Paris, save for its blingin' ceiling, would be an acoustic nightmare. Industrial in design, absorbers would likely compromise the restaurant's aesthetics.

Instead, over 1,800 mirrored pyramids line the ceiling, offering some sound diffusion. 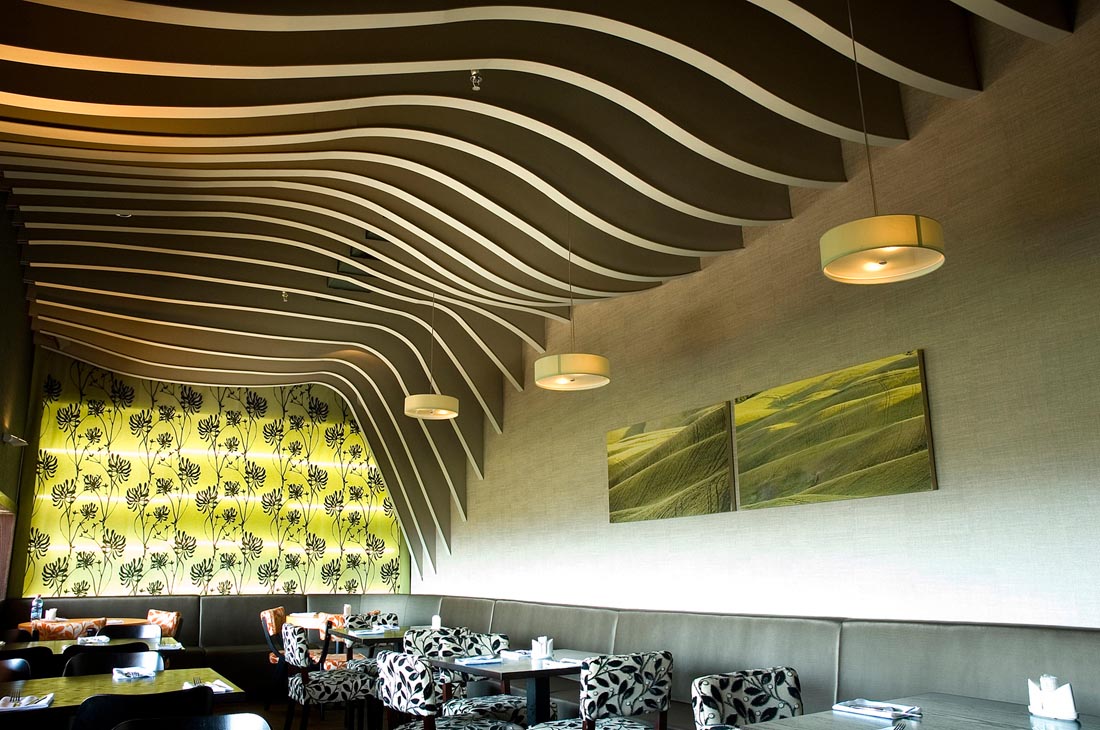 SO Architecture designed this restaurant in Israel to reflect the rolling green hills that envelope it.

The wave-like ceiling, with 36 contoured structures, acts as a natural sound diffusor, letting equal parts of sound to permeate its gaps and to reflect.

The ceiling also breaks up what would otherwise be a flat, boxed room. 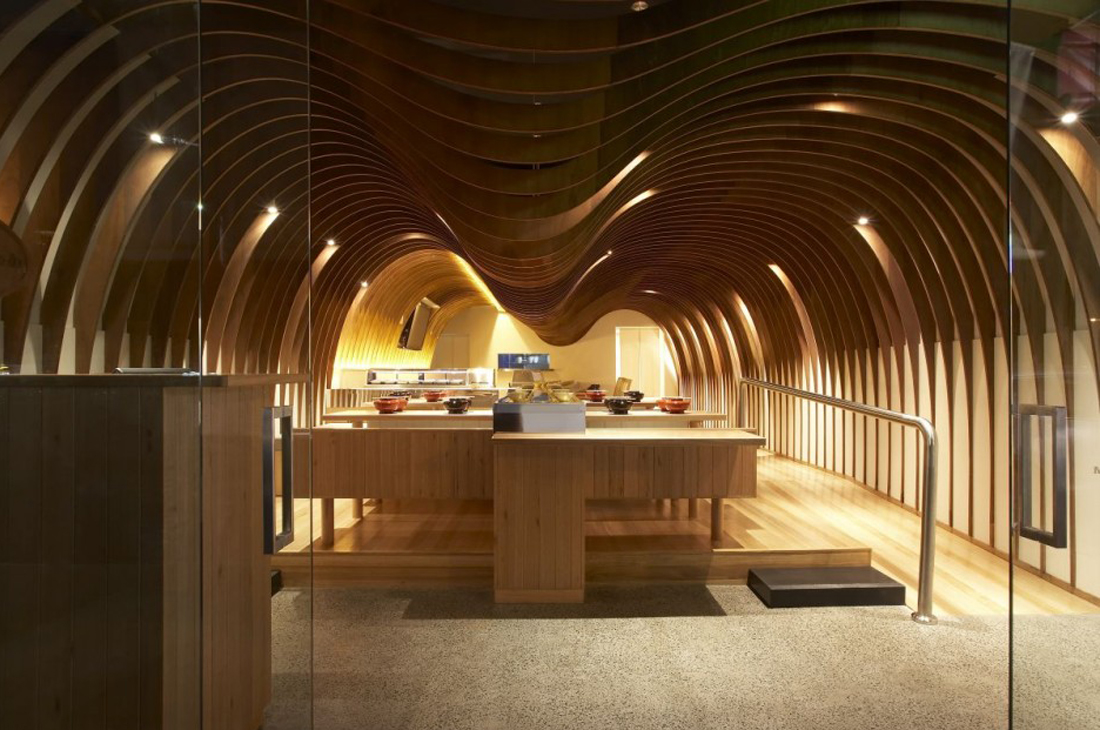 Koichi Takada Architects designed this restaurant with diner comfort and enjoyment at the forefront of their minds: "We aim to change the way we eat and chat in restaurants. The

acoustic quality of restaurants contributes to the comfort and enjoyment of a dining experience. The timber profiles generate a sound studio atmosphere, and a pleasant ‘noise’

of dining conversation, offering a more intimate experience as well as a visually interesting and complex surrounding". 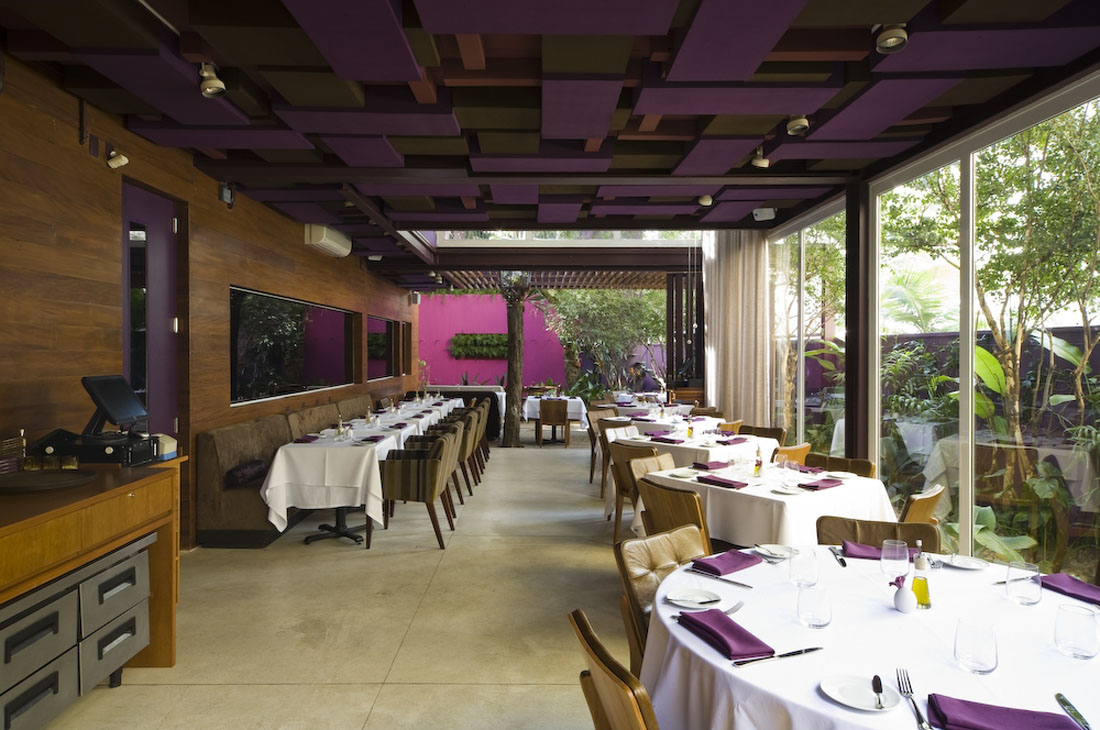 With supreme sound absorption, the humble acoustic panel is still the most versatile and cost effective way to incorporate acoustic solutions into design spaces.

where noise dies, rather than propogates.